A celebration of Puerto Rican Heritage, Art and Culture. 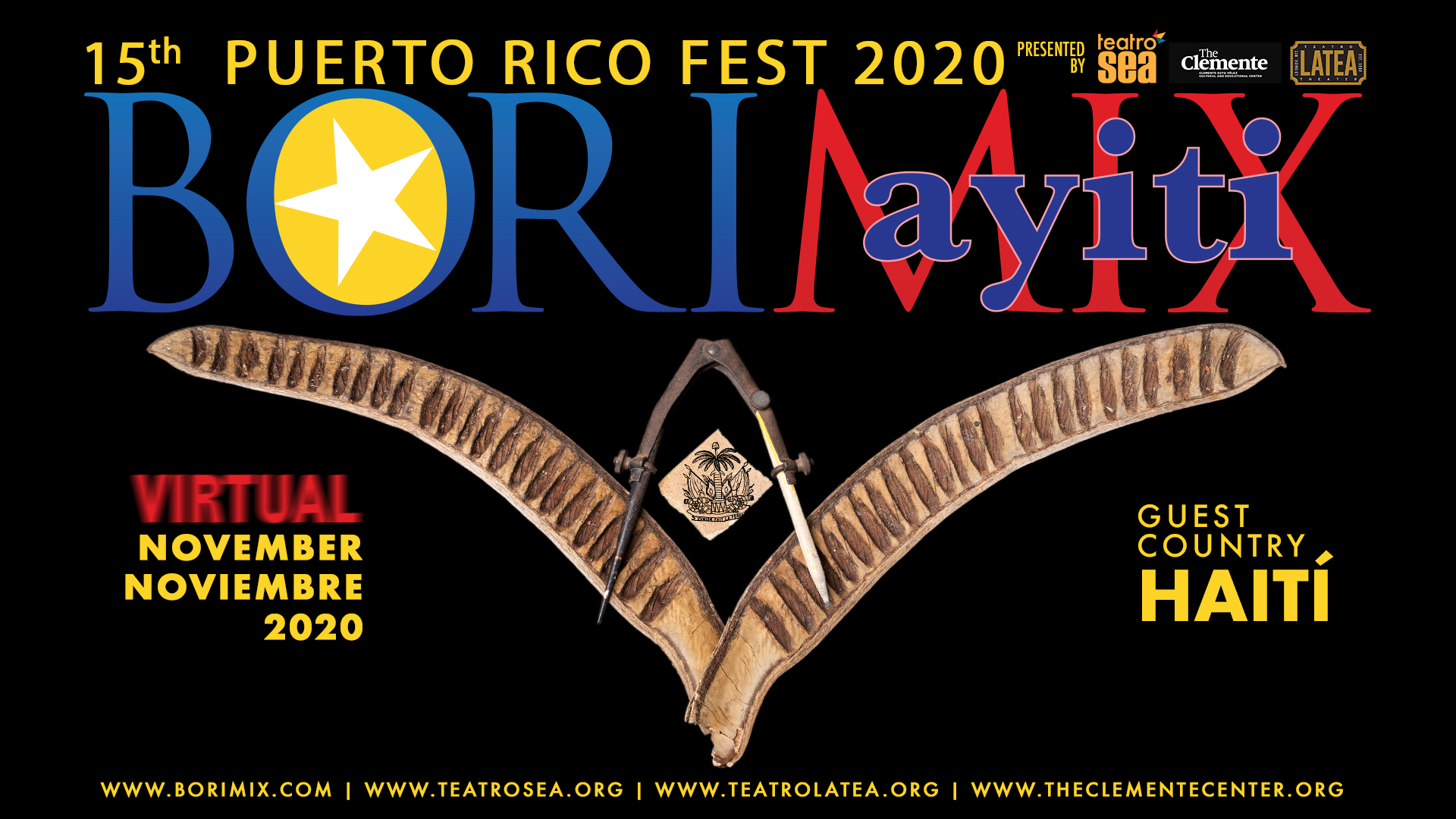 BORIMIX: A full month of Cultural Exchange between Puerto Rico and Haití

As a part of Puerto Rican Heritage Month, November, Teatro SEA, Teatro La TEA and The Clemente will host the fifteenth annual BORIMIX, a month long, city-wide festival of Puerto Rican Artists working in film, theatre, dance, music and the visual arts. This year, the group will feature Haití as a guest country, which is a part of the annual tradition of recognizing and honoring the mutual bonds across nations. In collaboration with a range of institutions committed to both Puerto Rican and Haitian arts and culture, BORIMIX will present multidisciplinary events throughout the month. BORIMIX will be streamed through Facebook Live: @teatroseanyc @teatrolatea and @theclemente.

“The Clemente is proud to co-produce this annual event that’s celebrated during Puerto Rican Heritage Month. The Clemente has long been a multicultural and multiracial hub of cultural exchange and production. It is fitting that we recognize Haiti as this year’s guest country, underscoring its unique and significant influence on culture and revolution in this country, during a year in which peoples from around the world have resolved to support the Movement for Black Lives.” said Libertad Guerra, Executive Director of The Clemente Soto Vélez Cultural and Education Center.

Opening night of BORIMIX 2020 will be broadcast Friday, November 6th at 7PM with a presentation of its annual BORIMIX Award Ceremony, and with its honorees soon to be announced. This ceremony will recognize and honor artists, institutions and community leaders who have advocated for Puerto Rican or Haitian citizens in the USA or in their countries.

This year BORIMIX will include three art exhibits, opening on Saturday, November 7th at 7PM. The audience will be able to visit two of them in person while maintaining social distance, while the third one will be streamed. The exhibition entitled Breathing History: Chapel of Reflection, 2020 by Diógenes Ballester will take place at the Abrazo Interno Gallery. This exhibition includes the installation Globalization, Post-Industrialism and Syncretism, 1999. This installation is a reflection on the exchanges of the Afro-descendant Diaspora between French people and immigrants from the former colonies exposed to the transnational world. Meanwhile, Ayiti mon amour by Patricia Brintle will be shown at the LES Gallery. Her art calls the viewer to thoughtful reflection as they discover something new in the Haitian life, culture, and history. Brintle’s art bridges the gap between the Haitian on the island and the Haitian Diaspora. The virtual art exhibit, Bori-Ayiti: Tree of Visions, has been curated by Maksaens Denis, Michelange Quay, and Miguel Trelles. This exhibit will be dedicated to the memory of Puerto Rican Artist Arnaldo Roche. The Haitian film/video shorts/performances that form part of the exhibit, transport Puerto Ricans, all Antillians and many Latin Americans from the Caribbean shore, to a place as likely to be familiar as it is likely to be unknown to most.

“In the spirit of the Haitian flag’s admonishment “L’union fait la force”, Teatro LATEA once again is joining The Clemente and Society for the Educational Arts/Teatro SEA to organize, curate and co-produce Borimix, Puerto Rico Fest 2020. Our combined efforts honor and promote learning, mutual respect and admiration as well as the connections that bring together Puerto Rico and the nations of Latin America. During this tumultuous year Bori-Ayti salutes Haiti, the Caribbean mother of all Latin American Republics, the cradle of Africa in the Antilles -the most resilient nation in our hemisphere.” -says Miguel Trelles, Director of Teatro LATEA.

Four amazing concerts will bring the Caribbean flavor to BORIMIX this year. An Afro-Caribbean jazz concert with Fernando García featuring Okai will take place right after the exhibits’ opening ceremony on November 7th. The other three concerts will include BélO, who has been hailed as Haiti’s musical ambassador, on November 8th at 7PM, Amigos de la cultura a young tribal group from Loíza on November 23rd and Paracumbé, one of the best Afro Puerto Rican ensambles, on November 29th at 7PM. Additionally, the documentaries Madam Saras, from Haitian filmmaker Etant Dupain, and After María: the 2 shores, from Sonia Fritz, will also be streamed. Both of them show the resilience of people from the Caribbean islands after a crisis provoked by the force of nature and poverty. For a full schedule of events, please visit www.borimix.com

“Our festival reached its 15th edition and it will be a special and unique one, as it is the moment in which we are living. Virtual and globally, once again, we will celebrate our Puerto Rican heritage through art. This year we are united with the Caribbean country of Haiti, unfairly under-celebrated. We will discover the many cultural riches that these two Caribbean nations share. I invite you to join us, wherever you are, in this great cultural event. Long live Puerto Rico! Long live Haiti! and Long live the Caribbean!” -Manuel Morán, director of Teatro SEA and founder of BoriMix.